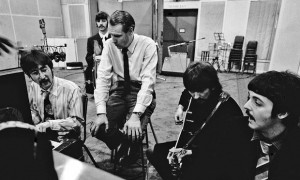 In the many tributes paid to Sir George Martin after his passing, one of the most common has been the recognition of his ability to get the best out of The Beatles.

Or as described by Adam Sweeting in the Guardian… ‘his capacity for making his clients raise their game to levels they themselves hadn’t believed possible’.

George himself sensed that it was more a matter of psychology than technology. “I realised I had the ability to get the best out of people,” he reflected. “A producer has to get inside the person. Each artist is very different, and there’s a lot of psychology in it.”

A great producer has the ability to see what an artist may not yet be able to see themselves. They can smell potential and possibility, and guide the artist down that mystery pathway.

It may not be comfortable…but to be on the leading edge of your art…there has to be challenge…and if not from you…then who is your Sir George Martin, that will refuse to accept the already acceptable?