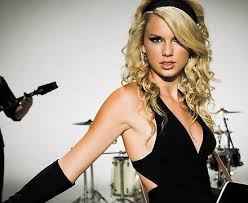 ‘Every singer out there is raising the next generation. So make your words count’. The words of American country super-star Taylor Swift, on her responsibilities as an artist and role-model.

It’s a rare appreciation of the way that an artist can influence their audience. And on the day that professional opinionater Jeremy Clarkson brazenly suggests shooting striking public sector workers, it’s good to know that someone has given thought to the relationship they, as a public figure, have with their audience.

The artists role in society is to be able to connect to, and transfer feelings, qualities and inspirations through their art, that are of benefit to their audience.

Thats why the best music for example is like a good friend or companion. It puts you in the best of yourself. When you play that piece of music, something transfers from the music to you.

Taylor Swift clearly has a keen instinct about this. That is why she is so careful about what she puts into the public domain. Jeremy Clarkson on the other hand, throws provocations in the public domain like confetti. He’s cheerfully untroubled by negative reactions, as he knows his core audience allow him a very wide berth.

It’s unlikely that he can see much beyond himself and his media based career. It’s a limited self-view. Taylor Swift on the other hand, appears to have a keen and knowing grasp on what it means to be an artist.

In times of challenge and change, her thoughtfulness and sentiments are the order of the day.